Here we tell a story of making the Groupworks pattern language.

Our process was rather organic — we had no idea how to develop a PL, especially one whose domain was so different from Alexander's.

**Getting clear** We probably took a year or so, four meetings, just to **get clear** what a pattern was, and what a pattern language was, in the context of facilitation work. Our meetings moved between SF, Eugene, Seattle and Vancouver, which each had large "pods" of skilled experienced facilitators, to give all those who Tree had managed to get interested in the project a chance to participate.

**Overall** About 50 different people were involved over about 4 years, with about 4 meetings a year, and then the "convergence" process took more intensive effort (twice a month or so for the final 6 months, often by conference call) with a core group of 6 people involved.

**'A starter set'** We were assisted by the use of several respected 'texts' on the subject of exemplary facilitation (such as *The Change Handbook*), which provided us with a good "starter set" of pattern candidates. This was enormously helpful in getting us grounded, even though **the final pattern set is very different from anything suggested in our initial set of resources**.

Early on, it was mostly an open discussion around specific questions like:

1 **QWAN** At each 'stage' of the facilitation process ie > planning & design, > in the moment during an event, > post-event review and learning - what have been the **"qualities without a name"** that exemplified excellent facilitation process in your experience? - Did they apply in different contexts and at different scales? - How were/are they invoked, or can they even be? - How and when can you anticipate the need for them? If you can't anticipate or plan to use them, - how and when do you recognize the opportunity for employing them in the moment? - What patterns (eg **aesthetics of space**) do you often have no control over, and what then can you do to appreciate and adapt yourself to them?

**2 Families of pattern** - Why do these 'candidate' patterns work? - Are they part of a larger pattern? - How do they relate to other identified patterns?

**3 War stories** Tell us a story about a great (or awful) facilitation experience (success stories vs war stories). What worked and why? what might have worked better and why?

**Anti-patterns** We talked a lot about whether each pattern should have an anti-pattern or 'problem' that the pattern can address. We even played around with an **'expert system'** that would ask questions about the challenges of an upcoming event and then spit out applicable patterns to address them. Ultimate it turned out to be an unfortunate combination of **too obvious** (no value added) and **too subtle** (didn't lend itself to a deductive approach).

**Domain, scope** We debated a lot about our domain/scope — was it - everything that used facilitation skills or - something more specific?

We narrowed in on **deliberative** 'events' and activities, those which involved collaborative discussion to some clearly defined end.

More formally: >"deliberative/dialogic group processes >aimed at goals such as decision-making, input, feedback, strategizing, visioning, and conflict resolution, >that take place in the context of meetings, conferences, and other convenings that have these goals".

So eg we excluded **educational events**, which tend to be more 1-to-n than **n-to-n** and although they may have seminars and study groups that are facilitated and highly interactive . . - the power dynamic is highly uneven, and - the ultimate objective is to assess knowledge of students, . . not to make collaborative decisions or surface collaborative insights, knowledge, perspectives or ideas.

Defining the domain/scope broadly enough but not too broadly was a lot of work, and we had to fight to keep it narrow enough to not try to solve **"all the problems of the world"**.

**Inducting, abducting** We used an inductive process early on — going from the specific to the general. What does this specific case tell us about **the universe of facilitated activities**? eg how does this idea of 'holding the space' apply in every situation in our domain?

We also (though we did not use the term) used an **abductive** process — knowing in many cases that we could not definitively state why some pattern seemed to "work well" but that it was enough that it seemed to do so, in many contexts and scales, so it was a pattern.

>For example, we defined "emergence" as a pattern in the deliberative group process domain because when we encouraged an iterative process in a group (what might be called a dialectic) we observed the emergence of ideas and truths that would probably not have surfaced if the individuals had worked on the problem solo.

Then we debated "is the pattern here **iteration** or **emergence**?" and concluded that since there were good examples where each worked well even in the absence of the other, they were probably **both** patterns.

Abduction entails acknowledging that facilitation is not a science but **an art** — we are looking to discover the most plausible explanation (or conjecture) for "what just works", and why, in situations full of **uncertainty, incomplete information, and imprecision**. We were fortunate to have many of us skilled in the consensus process to keep us from getting paralyzed!

**Diverging, discarding, merging** Early on the process was mainly generative and divergent — let's get all the possible patterns on the table. At that point we focused on whether a nominated pattern met the **criteria/hallmarks**, and whether it was **redundant, overlapped, subsumed or was subsumed by** some other pattern.

We tried as much as possible to **combine** patterns, without losing some of the distinction and **granularity**.

We toyed with and discarded the idea of having sub-patterns within meta-patterns, mostly because it was messy and not of great practical use to facilitators trying to use the pattern language.

**Converging - brutal work** Later on the process became convergent, and we **identified six of us** to do the "crunch" work of distilling the many identified pattern candidates down, ideally to **about 60** (several people were adamant that a pattern set larger than that would be too hard to learn and use).

Getting it **down to 115** was not that difficult, though enormously time consuming. We used several 'containers' for patterns that didn't seem to fit but had some instinctive importance, patterns that certain of us were adamant about even though "outvoted". We still have the remnants of **a "potting shed"** for patterns that contain an acknowledged germ of an idea but which we just couldn't develop enough to make it stand up to the rigours of the other patterns.

Getting it down from there to the "final" **91 patterns** was brutal — **relationships were broken** in this endeavour, and some just quit the process entirely. We finally concluded that we couldn't reduce it further, even though there was nothing magic about 91.

**A very practical subset** The original plan was to write **a book** about the patterns, kind of a 'meta' replacement or complement to the books of facilitation methods.

In fact we found we could 'map' patterns to methods — usually **not more than 6-8 patterns** significantly differentiated most of the leading methods of group process facilitation from each other (eg **world café**, **open space** etc).

This mapping process and the ease with which we could do the mapping and also use it to decide which methods to use when planning an event was pretty crucial in giving us the courage to go on when things got tough.

**Media presentation of the language** At one of our final in-person meetings (at my house) we put the names of the 91 patterns, each on a **sticky note**, in the middle of my kitchen island, and attempted to sort them into **categories**, each of which was to be a chapter in the book.

Three of us almost simultaneously pronounced that, instead of a book, what if we produced a **card deck** so that users could **sort them any way it made sense** to them? Which is why Group Works is a card deck.

We did end up agreeing on (9) categories, and they can be useful in explaining and teaching the language, but they are a bit arbitrary, and **advanced users don't make much use of them**.

We also agreed to 'link' (at the bottom of each card) the **'related' patterns** for each pattern, which is different from their category. There was no consensus over the value of doing this, but some of us really like this feature.

I could tell you more about the process (eg the agony of agreeing on **short names** for each pattern, and coming up with **images** for each), but perhaps this is enough to go on. 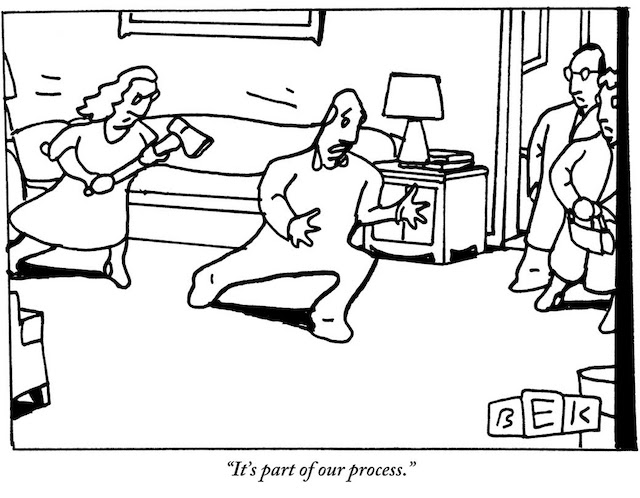 "It's part of our process!"